When a production company starts shooting a horror film in a 100 year old...and actually haunted...Sid Grauman built movie palace turned strip club in San Francisco, the "inhabitants" revolt and take over the movie for their own purposes with bizarre and shocking results. 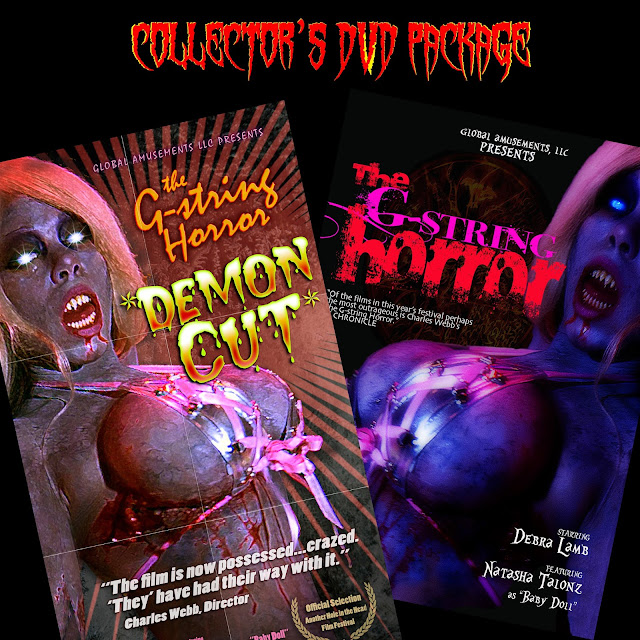 Intrigued by the Director's Notes and trailer of the bizarre *Demon Cut* of The G-string Horror? Check out the Theatrical World Premiere of *Demon Cut* at the Another Hole in the Head Film Festival in San Francisco in late November/early December, 2013.

Global Amusements is making available an limited number of 2 DVD sets of the original edit of The G-string Horror plus a custom burned copy of the *Demon Cut* for $66.66, which includes sales tax and normal shipping via USPS in the US and Canada. This rare pre-release Collector's Package also includes a personalized copy of the Director's Notes, which attempt to detail how this strange manipulation of the film came about.

Please click the Buy Now button on the right to pay via credit card, debit card or PayPal.

Back to g-stringhorror.com.
Posted by The G-String Horror at 12:33 PM

There’s nothing like shooting HD digital video in a psychic vortex. No telling what you’re going to get from the camera…or the actors for that matter. Am I a “believer”?...Nahhh!

A film is a petrified fountain of thought.
Jean Cocteau

Cinema is the most beautiful fraud in the world.
Jean-Luc Godard

I also have always liked the monster within idea. I like the zombies being us. Zombies are the blue-collar monsters.
George A. Romero

In 1985 I was shooting in an exercise chamber at the Northern Shaolin Temple in China that had never been photographed before. The monks allowed me and two other cameramen to shoot for a few minutes only. We kept shooting, I suppose, longer than the unseen “inhabitants” of the chamber thought acceptable. Although all indications were that we were recording, there was nothing recorded on any of our tape beyond the first couple of minutes that the monks had originally designated. A similar thing happened while I was shooting a sub basement “tour” with a dancer/”witch” at the Market Street Cinema. We encountered several of her “friends” who did not like what I was doing. From that point on, nothing was recorded even though, by all indications, the camera was functioning properly.

That was just the beginning. Much of the strange tale told in the film actually happened in a slightly different form. Shots were moved around in the edit…not my doing. At times the movie DID change each time it was viewed…not just for me…others also. And none of us were “smoking” or drinking. The actors were “not themselves” at times. On several occasions when an actress was playing a fictional version of one of the ghosts, it seemed that the “real” ghost took over and enjoyed being “exercised” by a human host.

The dancer whose friends we disturbed on the basement tour told me that there were four ghosts who made the building “home” when we began shooting and only three by the time we finished. Somehow, she claimed, our actions in the theater had helped one of the spirits…the ghost of a stripper who was rumored to have been have been murdered in the basement…to “move on”…